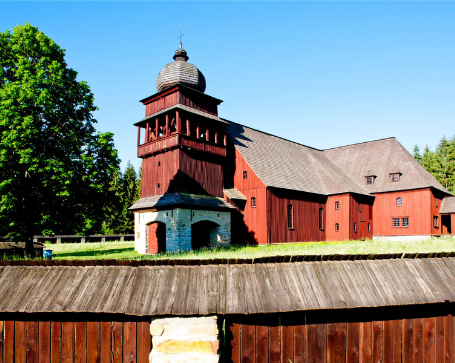 Behind the village, Svaty Kriz is located a wooden articular church, which belongs between the biggest wooden churches in Europe. It was moved here during building of Liptovska Mara in years 1974 – 1982 from flooded village Paludza.

The first wooden evangelic church in the village Paludza was built in 1693 after Sopron Concilium at which were agreed 82 articles when emperor Leopold let protestants build wooden churches. Churches had to stay away from the village and they had to be built only from the wood. Later was the church built by a carpenter master Jozef Lang, that could not read and write, without any projects in 8 months in year 1774 into today’s appearance.

The church tower was built in the year 1781 and in years 1921-1922 were new bells embedded in the tower. In the interior is a baroque altar, pulpit, baptismal font, paintings with biblical scenes, Venetian glass chandeliers and organ. The church has capacity of 6000 persons.